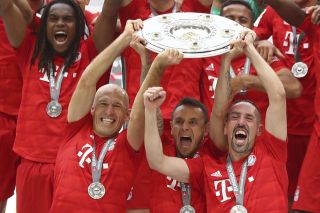 The duo came off the bench in the second half and put an exclamation mark on a 5-1 final-day thrashing of Eintracht Frankfurt at the Allianz Arena, with Ribery netting the fourth in the 72nd minute and Robben the last six minutes later.

After 12 years with Bayern, Ribery said: “My whole family, my children, my wife, my parents, my wife’s parents and my cousins ​​came from France for this special moment.

“It was hard, but the main thing today is that we are champions.

“This is my last big moment here in the Allianz Arena with my colleagues and the fans. I was not only here two to three years, I was here 12 years at Bayern. What we did is just amazing.”

Robben, a 10-year veteran who had spent over four months on the sidelines through injury before finally returning earlier this month, said: “After such a game many, many emotions pass through your whole body, which you cannot describe in words. That’s something you just have to experience.

“But the best part for me is that many of the guys I played with in my time with Bayern were here today. I fought for five months to come back, and today was just the reward for it.”

After Kingsley Coman scored inside four minutes Bayern were given a minor scare when Sebastien Haller levelled five minutes after the break.

The response, though, was emphatic as David Alaba restored Bayern’s lead in the 53rd minute, with Renato Sanches making it 3-1 five minutes later prior to Ribery and Robben wrapping up the win and the title.

Proud coach Niko Kovac said: “Thanks to my team and our fans, we did a great job. We have achieved something incredible.

“We were nine points behind (runner-up Borussia Dortmund) in the fall – congratulations to my boys. I’m totally happy, but also drained.”

Robert Lewandowski, who clinched a fourth top-scorer trophy despite not adding to his 22 goals for the season, admitted to feeling emotional for Ribery and Robben.

“Before the match I saw the families of Arjen and Franck, I have to say, I nearly cried,” said Lewandowski.

The Poland striker added: “That was an endgame for us. We knew that today we not only had to win but to show who is the German champion.

“We played really well, had fun and scored a lot of goals. Even if the season was not so easy, we deserve to be German champion.”

Eintracht Frankfurt coach Adi Hutter naturally offered his “congratulations” to Bayern but was proud of his players given the season they have enjoyed.

Hutter said: “My players are completely squeezed like a lemon. That was game number 50 at a high level.

“We have finished seventh, reached the Europa League semi-final, had great nights.

“Many players have developed, so you can balance very, very positively this year. In my view, an absolutely positive conclusion. I’m very proud.”