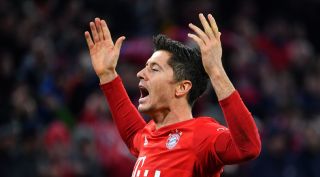 Bayern Munich striker Robert Lewandowski has revealed that he came close to joining Manchester United in 2012.

Alex Ferguson attempted to acquire the Poland international from Borussia Dortmund ahead of his final season in charge at Old Trafford.

But the Scot was unable to prise Lewandowski away from Signal Induna Park, and instead bought Robin van Persie for Arsenal.

“I was speaking with him [Ferguson] after two years at Dortmund and at that time I was really thinking about a move to Manchester United," Lewandowski told the Guardian. "Because of Ferguson and because of Manchester United.

"Borussia Dortmund said, ‘No, that’s that.’ That was the first time I was thinking about the move because if you get a phone call from Sir Alex Ferguson, for a young player it was something amazing. That was a special day for me."

The Champions League has eluded the centre-forward, though, and Lewandowski is keen to make amends this term.

Hansi Flick's side face Chelsea in the round of 16, with the first leg scheduled for Tuesday at Stamford Bridge.

“The players feel more confident because they know what the trainer wants from them,” he added. “The communication is much better. I still believe that one day we will play in the Champions League final and we will win it.”

Lewandowski turns 32 later this year but he says he has no plans to retire any time soon.

“I want to play for a long time,” he continued. “I don’t feel 31 years old and everything I am doing now is working to keep me in top for the next five, six years. I don’t want to be a striker who spends 90 minutes in the box waiting for the ball. I don’t like just getting the ball 10 times during a game. It’s not enough for me; I find those games difficult.

"That’s why I am always looking for space to get the ball and find my teammates. I can work on everything still. But one thing? Maybe to shoot from distance.”