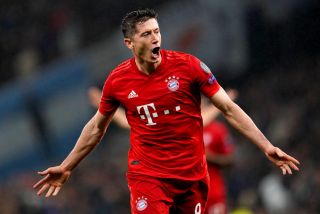 Lewandowski’s second goal – his 25th in 23 league matches and 38th in all competitions this season – two minutes from time extended Bayern’s Bundesliga lead to four points.

Bayern had taken a 25th-minute lead when Serge Gnabry found room in a crowded goalmouth to fire home his 15th goal of the season.

But Dennis Srbeny punished Manuel Neuer’s rush of blood – the goalkeeper racing from his penalty area – to level a minute before the break.

Lewandowski was twice foiled by Paderborn goalkeeper Leopold Zingerle in the space of 60 seconds before sidefooting home Gnabry’s cutback 20 minutes from time.

Napoli moved into the top six of Serie A in Italy with a 2-1 win at Brescia.

Jhon Chancellor put Brescia ahead after 26 minutes from close-range.

But Lorenzo Insigne levelled from the penalty spot four minutes after the restart. Fabian Ruiz struck the winner for Napoli five minutes later.

In Spain, there was a thrilling 3-3 draw in LaLiga between Real Betis and Mallorca.

Juan Hernandez put the visitors ahead after 16 minutes, but Sergio Canales soon levelled from the penalty spot.

Betis took the lead for the first time through Joaquin three minutes after the interval.

But Takefusa Kubo equalised 20 minutes from time to secure the point that takes Mallorca out of the relegation zone.

In France, Lyon won 2-0 at Metz to claim a first win in five Ligue 1 attempts.

Moussa Dembele put Lyon ahead from the penalty spot in first-half stoppage time.

Metz forward Habib Diallo was sent off after 82 minutes and substitute Houssem Aouar sealed victory for Lyon in the fourth minute of added time.

Nice missed the chance to move into the top five after being held 2-2 at home by Brest.

Patrick Vieira’s side led 2-0 after 33 minutes through Adam Ounas and Kasper Dolberg.

But Samuel Grandsir halved the deficit on the stroke of half-time and Dante’s own goal eight minutes after the restart saw the spoils shared.