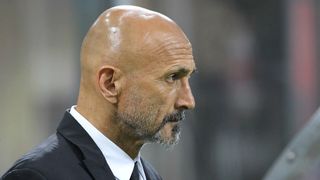 Roma's Luciano Spalletti has the "ideal profile" to be the next coach of Inter, according to the club's former president Massimo Moratti.

Spalletti is out of contract at the end of the season, while Inter are without a coach following the sacking of Stefano Pioli on May 9.

The 58-year-old is reportedly a front-runner for the San Siro vacancy despite Roma sitting second in the Serie A table going into the weekend's final round of fixtures, while Inter are seventh and cannot qualify for Europe.

Moratti believes Spalletti - who has twice coached Udinese and won two Russian titles at Zenit - has enough experience to compete with Juventus, who claimed a sixth straight Scudetto on Sunday, at the top of the league.

"I think he would be an ideal profile," Moratti told Retesport. "He's an intelligent man and he has experience abroad.

"He did well with Roma this year and in my opinion he'd be good for Inter.

"With his qualities combined with some good management from the club, we can hope to challenge Juventus next season, just as Roma and Napoli have done this year."

Inter's owners Suning Holdings Group have also been linked with moves for Chelsea's Premier League-winning manager Antonio Conte and Diego Simeone, but the Argentine has announced he is staying at Atletico Madrid.