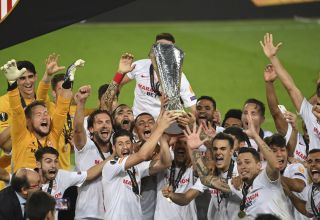 The Belgium international, who had put his side ahead with a fifth-minute penalty, stabbed Diego Carlos’ 74th-minute acrobatic effort into his own net at the RheinEnergieStadion as the LaLiga outfit fought back to win a pulsating encounter 3-2 on a dramatic evening in Cologne.

They were indebted to striker Luuk De Jong, who had cancelled out and then overhauled Lukaku’s spot-kick, and although Diego Godin levelled for Antonio Conte’s men, it was simply not meant to be.

De Jong’s semi-final winner against Manchester United as a substitute had earned him a start in the only change to either side, but it was Inter counterpart Lukaku who was first to make his mark on the game.

Less than four minutes had elapsed when the Belgian surged past Carlos, who hauled him to the ground inside the box and was somewhat fortunate to be shown only a yellow card.

However, Dutch referee Danny Makkelie had also pointed to the spot and Lukaku duly obliged with the minimum of fuss to give the Italians the lead.

Not to be outdone, De Jong responded in fine style within seven minutes when he got across his man to meet Jesus Navas’ near-post cross with a thumping diving header which gave keeper Samir Handanovic no chance.

Conte was cautioned on the sidelines amid frayed tempers on and off the pitch, and there was little let-up in the pace as the Spaniards in particular repeatedly found themselves stretched.

It was they who took the lead for the first time on the night when De Jong climbed to power a towering header past Handanovic from a 33rd-minute Ever Banega free-kick, but the Serie A runners-up responded almost immediately as Godin levelled in similar fashion from Marcelo Brozovic’s cross.

The Inter keeper had to tip Lucas Ocampos’ injury-time header over as an eventful first half drew to a close, and the sides returned in more measured fashion knowing they were potentially just 45 minutes from triumph or disaster.

Ocampos lashed a 57th-minute shot into the side-netting after ghosting past Godin, and Ashley Young curled a long-range effort just over at the other end as the tempo increased once again.

Sevilla’s high press was starving the Italians, and in particular dangerous front two Lukaku and Lautaro Martinez, of meaningful possession, and the former Manchester United striker was denied one-on-one by keeper Yassine Bono after being played through by Nicolo Barella with 65 minutes gone.

But Julen Lopetegui’s men regained the lead with 16 minutes remaining when Lukaku inadvertently turned Carlos’ overhead kick – which appeared to be heading wide – into his own net to set up a grandstand finale, and although it took a crucial goal-line clearance by defender Jules Kounde to keep out substitute Alexis Sanchez’s late effort, they held on to spark delirious celebrations on the whistle.