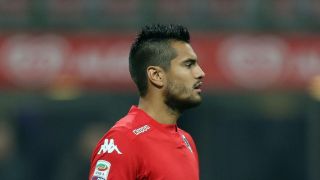 De Gea has been constantly linked with a move to Real Madrid in the wake of Iker Casillas' departure from the Santiago Bernabeu, having blossomed into one of the Premier League's top shot-stoppers.

Though new Real coach Rafael Benitez has remained non-committal on his interest so far, even backing Keylor Navas as his new number one, talk of former Atletico Madrid man De Gea returning to the Spanish capital has not died down.

Romero completed his move to Old Trafford on Monday, penning a three-year deal with the 20-time Premier League champions.

And with Victor Valdes set to leave the club over his apparent refusal to play in Under-21 matches last term, Van Gaal concedes Romero could be thrown in at the deep end if De Gea does leave United.

Van Gaal told MUTV: "I know him very well and I think in our situation, if De Gea is going or not going, it is always a threat and we have to take care, make sure that we are prepared.

"That is why I think it is very good that Sergio Romero is now a Manchester United player."

Van Gaal has previously worked with Romero at AZ, where the pair won the Eredivisie in 2009.

"He was also a former player of mine," Van Gaal added. "I was trainer-coach, manager of AZ Alkmaar in the Netherlands, I picked him up when he was 19 and he was a great talent.

"We became champions with him, with a minor club, and in the Netherlands it was a fantastic result of course."