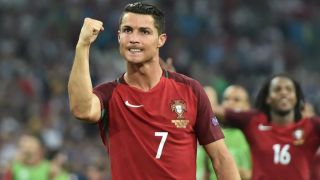 Cristiano Ronaldo is dreaming of winning Euro 2016 after Portugal upstaged Poland in the quarter-finals on Thursday, with the captain hopeful the time for international success has now arrived.

Portugal advanced to the semi-finals of the European Championship thanks to a 5-3 penalty shoot-out victory over Poland in Marseille.

The last-eight clash at the Stade Velodrome had finished 1-1 after extra time, before Ricardo Quaresma stepped up and converted the winning spot-kick after Jakub Blaszczykowski had his penalty saved.

And speaking afterwards, Ronaldo - who scored the opening penalty - is determined to go all the way in France after featuring in the Portugal side who finished runners-up to Greece at Euro 2004.

"It is a dream. As I've always said and I don't hide, it is a dream to me winning a title with the national team," Ronaldo said.

"We are on the right track and I hope the time has come."

Standing in the way of Portugal reaching the final at Stade de France on June 10 is either Wales or Belgium.

The two nations will meet in Friday's quarter-final but Ronaldo has no preference.

"They are teams who reach the quarter-finals playing well," the three-time Champions League winner added.

"Wales has surprised the tournament, so has Iceland, and Belgium has showed during the last years that they are an excellent team."