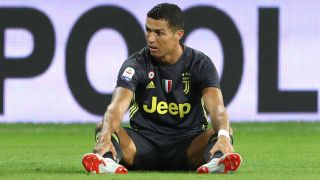 Cristiano Ronaldo is a "true champion" but too often goes missing during the biggest matches, according to former Juventus star Jurgen Kohler.

Ronaldo ended a spectacular nine-year spell with Real Madrid in July when he joined Juve in a €112million deal.

A winner of four Champions Leagues and four Ballons d'Or during his time at the Santiago Bernabeu, the Portugal star has yet to make his mark in Serie A, having gone three games without a goal.

He also failed to score in last season's Champions League final, despite netting 15 times in total in the tournament, while his four goals in the World Cup all came before Portugal's exit at the last-16 stage, meaning he has still never scored in a knockout match at international football's biggest event.

And Kohler, who won one Scudetto, one Coppa Italia and the UEFA Cup with Juve, has questioned Ronaldo's ability to turn up for the biggest occasions.

"There are no two opinions about Ronaldo's qualities. He holds many records in Spain. He has managed to win the major trophies. You have to pay tribute to him," the former Germany international told Sport1.

"However, I must say that you rarely see Ronaldo in the decisive matches. Then he goes on to score the goal to make it 4-1, with a penalty, and wants to be celebrated for it. But that's the way he is, too."

Kohler appeared to be referring to the 2014 Champions League final, in which Ronaldo scored a penalty deep into extra time to seal a 4-1 win for Madrid over Atletico Madrid, before removing his shirt in celebration.

Despite his criticism, Kohler believes the 33-year-old's work ethic is something that sets him apart from his contemporaries.

"I talked about him to a lot of people," he said. "Everyone is fascinated because he also works a lot on the pitch. Only the true champions are willing to work more. That applies to Ronaldo. That's the difference between world-class players and the regulars."

Another player to join Juve in the most recent transfer window is Emre Can, who moved to Turin after declining to sign a new contract with Liverpool.

Kohler thinks the midfielder made the correct decision, even if he was partly motivated by money, and thinks a transfer to Real Madrid or Barcelona could be on the cards in future.

"Sporting-wise, yes [it was the right move]," he said. "The new situation is very interesting for him, although he had good games and developed well at Liverpool.

"He'll earn more in Turin than he did with the Reds, which of course was a reason for the change. Any players who say otherwise are not telling the truth. At the time, I left Bayern Munich because I could earn more money.

"Defensive players are not like sand in the sea. There are only a few really good ones. Emre is the right player for Juve. It's harder to win titles with Liverpool. With the Old Lady, he has the certainty of playing at a top club.

"Emre is now in the prime of his life. Even after a four-year contract, he could move to a Real Madrid or Barcelona. That was definitely worth considering. If you win a few leagues with your club, you will of course become more interesting for other clubs."