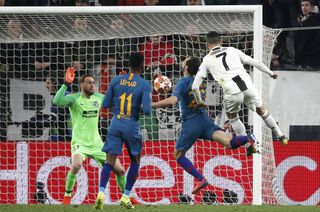 Cristiano Ronaldo fired a hat-trick as Juventus beat Atletico Madrid 3-0 to turn their tie on its head and reach the Champions League quarter-finals.

Late goals from from Jose Gimenez and Diego Godin had earned Atletico a 2-0 first-leg advantage, but Ronaldo headed Juve level with headers in either half and converted a late penalty to clinch a deserved 3-2 aggregate win.

Juve responded and took the lead on the night in the 27th minute through Ronaldo, who out-jumped Godin at the far post and headed Bernardeschi’s cross powerfully beyond Atletico goalkeeper Jan Oblak.

It was the Portuguese’s 22nd goal in 36 games for Juve and his 23rd in 33 appearances against the Spanish club.

Bernardeschi twice fired over from outside the penalty area and Ronaldo went close to levelling the scores on aggregate when he headed Leonardo Spinazzola’s cross wide.

Giorgio Chiellini went closer for the Italians just before half-time as his header towards the top corner forced a brilliant save from Oblak.

Morata, back in for the suspended Diego Costa after being rested at the weekend, headed Koke’s fine cross inches over the crossbar.

Oblak appeared to have pulled off a stunning save, but Dutch referee Bjorn Kuipers checked with the goal-line technology on his watch and correctly awarded a goal.

Bernardeschi made a hash of his header from another Cancelo cross before Atletico’s Angel Correa crashed a rising shot just off target.

Mario Mandzukic fired an angled effort wide as the game entered the final quarter and Moise Kean was narrowly off target as Juve chased the decisive third goal.

There were four minutes remaining when Bernardeschi’s storming run carried him into the box and, when he was nudged over by Correa, Kuipers pointed to the spot and Ronaldo made no mistake from 12 yards.