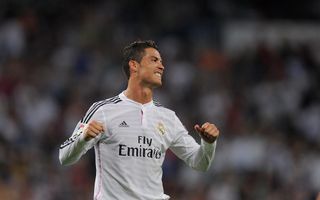 The Portugal international was dogged by injuries towards the end of last season and during the World Cup in Brazil.

Ronaldo has also been omitted from the Portugal squad for their opening Euro 2016 qualifier against Albania next weekend, with Ancelotti opting to give him an extra week's rest to regain full fitness.

Having opened his Liga account for the season against Cordoba on Monday, Ronaldo is now due to return to action for the visit of champions Atletico Madrid on September 13.

"Cristiano is fine, but we wanted to use this week and the next two weeks to ensure he recovers completely and to get him in top condition to prepare for the games against Atletico and the Champions League," Ancelotti said on Saturday.

"He's not in the matchday squad."

The Italian revealed he could look to strengthen before the transfer window closes but cooled fears over his squad being understrength.

"I can't confirm anything. The market closes on Monday and something may happen or it may not," he continued.

"Some people might think we don't have many players but it's a very versatile squad and we have every position covered. We virtually have five strikers, because Isco, James [Rodriguez] and Jese [Rodriguez], who returns soon, can play up front.

"Until the market closes we can't say whether there will be any new signings. The squad isn't decided.

"If we think a signing could be good to improve the squad we'll do it. If not, the squad is very competitive."