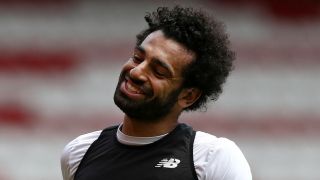 The Champions League final continues to be billed as an individual showdown between prolific attackers Cristiano Ronaldo and Mohamed Salah, but the Egypt international insists Liverpool and Real Madrid collectively should take centre stage.

The two stars have scored 44 goals each across all competitions this season, form that has propelled their respective teams to the decider of UEFA's elite club competition in Kiev on Saturday.

Speaking to BT Sport, Reds forward Salah called for the spotlight to fall more evenly on all 22 of the players set to line up for kick-off at the NSC Olimpiyskiy Stadium.

"It's not about Ronaldo or Salah or someone else. It's about the clubs.

"To be honest, I feel great about the numbers but everyone is talking about Ronaldo and [Barcelona's Lionel] Messi because they've been at that level for, like, 15 years, so I'm very proud to see myself compared with the names.

Liverpool manager Jurgen Klopp, meanwhile, emphasised the scale of the challenge facing his side, who are seeking to prevent Madrid from becoming the first team in the Champions League era to win the competition three times in succession.

"They are much more experienced than we are," he told BT Sport.

"We are top class, we are really good. But they [Madrid] proved that [they are world class]. They have world champions, European champions, all that stuff in their team."

As for the pressure that will inevitably accompany Britain's most successful European side, Klopp said: "We are Liverpool, that's how it is.

"You can win things with this club. People believe in this team and not [just] the teams of '81, '84, 2005, stuff like that. They don't have to use their brain too much for old memories to enjoy football.

"You can enjoy the moment with these boys. I'm really happy about that and I hope we can do it."