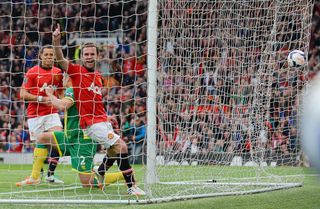 Rooney and Mata both scored twice - the latter having come off the bench during the second half - to end a turbulent week at Old Trafford on a positive note following David Moyes’ sacking.

"For me it is a pleasure to play under his management," Mata told Sky Sports.

"When I was a kid I remember him playing - he's a proper Man United boy. He was born almost in here.

"For Wazza (Rooney), for me and for all the players it is a pleasure to be with him in the training ground every day but it is not down to us, the decision (on Moyes' long-term manager).

"What we have to do now is enjoy with him until the end of the season."

Rooney admitted seeing Giggs on the touchline was odd to comprehend, but is confident the Welshman will be a success in the role.

He added: "It was a bit strange, having played with him for the last 10 years.

"We all know Giggsy is an experienced player, he's been part of the coaching staff for the season - he's built to be a manager.

"We can see that in how he has handled himself since he took over. It was fantastic to get out there and get the win for him.

"Giggsy does have the credentials to be the next boss but that’s down to the board, it's down to Giggsy. Who knows?"