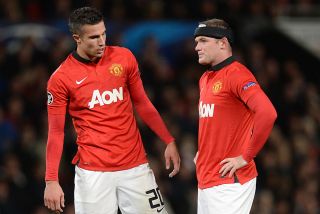 Rooney had been rumoured to leave United in the off-season, after he felt now-retired manager Sir Alex Ferguson was playing him out of position after Van Persie had arrived from Arsenal.

With his former boss at Everton, David Moyes, now in charge at Old Trafford, Rooney conceded he was 'settled' once more but the 27-year-old said the reason he wanted to leave Manchester came down to being pushed into a midfield role.

"I actually felt when I played in midfield I did OK but I didn't want to play there," Rooney said on Wednesday.

"I've had no problem in the past playing out of position. But I felt I deserved the right to play in my position and that wasn't happening.

"I think, naturally, I was a bit disappointed and maybe that affected some of the games I played.

"I know myself that last year wasn't my best season but there were times when I was playing in different positions.

"I didn't feel I got a consistent run of games up front. Sometimes when you're not playing in one position all the time it's difficult to adapt."

Chelsea manager Jose Mourinho was ready to pounce on Rooney but had two transfer bids for the striker rejected by United.

And Rooney said he was happy for the club to have his fate lie in their hands, as they did not allow him to move to Stamford Bridge due to the fact it would strengthen a title rival.

"I'm sure the club made that clear," Rooney said, of United's refusal to sell.

"Obviously there's been a lot of stuff happening and everyone has been waiting for me to say something but I've spoken to the people who matter at the club and we've known ourselves what was going on.

"I didn't want to come out saying anything.

"I just wanted to concentrate on my football.

"I'll concentrate on my football and see what happens after that."

Rooney said Moyes' attitude on the training track had been a refreshing change from Ferguson's ways.

"It's a bit different in terms of David Moyes and his staff coming in," the striker said.

"The training is different, there's a different style, a different way of thinking about how he wants us to play.

"I feel that's really benefited me. I feel as fit as I ever have done. I had a couple of injuries pre-season but I feel great and in good shape. It's a mixture of things, but I am happy and I am enjoying my football."