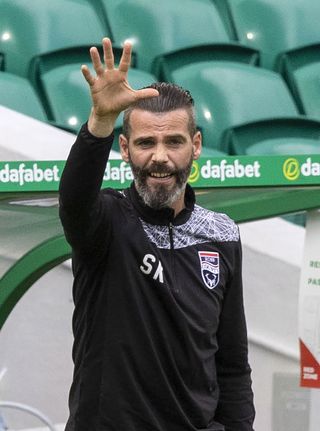 County were denied a friendly against Hibernian on July 19 after their opponents failed to get their Covid-19 test results back in time.

However, Kettlewell was able to field two different line-ups in a 2-2 draw with Livingston on Saturday and a 2-0 defeat at Celtic Park 24 hours later as he prepares for his team’s Scottish Premiership opener against Motherwell next Monday.

Kettlewell, who hopes to complete the loan signing of Celtic goalkeeper Ross Doohan early this week, said: “Not having the 90 minutes last week gave us a bit of an issue and fortunately enough Celtic were looking for an extra game.

“With one game against Livingston we were probably looking at players playing 45 minutes each again with the size of squad we have got.

“I was more than prepared to see if we could push the boundaries a bit and get everybody 90 minutes.

“It gives us a clear week now to prepare for Motherwell at home, which is obviously going to be a tough encounter based on what they did last season.

“But you have to relish it. We are all in a position where we are looking forward to the return of football in this country.

“So hopefully, fingers crossed, we can go through with no further problems and we can get back going again because I think I speak on behalf of everybody here that we are desperate to get the game going again in this country.

“It will hopefully be an exciting campaign and fingers crossed we can start to get supporters back into venues.”