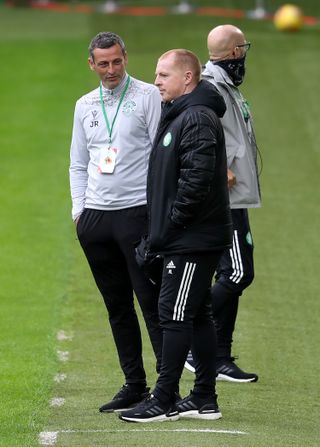 Hibernian head coach Jack Ross trusts his players to follow the coronavirus protocols after Scottish football received a final warning from the government.

First Minister Nicola Sturgeon issued a “yellow card” to the game after breaches of rules from eight Aberdeen players and Celtic defender Boli Bolingoli led to the postponement of several of the two clubs’ games.

The Scottish Government had warned of a potential suspension of action on the morning of Hibernian’s 1-0 win over Dundee United after news broke of Bolingoli’s flying visit to Spain days before he played against Kilmarnock.

The doomsday scenario was averted following the latest in a series of discussions between government and the football authorities, with Ross hopeful the focus will now be on the positive way the game is dealing with the Covid-19 threat.

“I understand some of the headlines around it,” he said. “Undoubtedly some individuals have made really poor judgements. But a heck of a lot of people have done things properly. As is often the case, they get overlooked.

“We’ll continue to do things properly. We’ve got to make sure that we are not desperately looking for the next person to do something outside what they are supposed to be doing.

“Hopefully we can stay focused on the positive side of it and continue to enjoy seeing football because it has been enjoyable being back. The games I’ve been involved in I’ve loved. And I love watching games.

“We as a club have been respectful. We continually remind the players of the need to do that. I trust them to do that.”

As well as calling off three matches on top of Aberdeen’s postponed trip to St Johnstone last weekend, the Scottish Professional Football League agreed to implement several measures to appease the government.

An immediate player education programme will be put in place to help ensure players and staff do not break rules, a range of sanctions will be created so players can be punished for breaches and the league will undertake promotional activity to aid public health messages.

Sports minister Joe Fitzpatrick said: “A lot of work has gone on behind the scenes during these past months to create the protocols and testing regimes that have allowed top level professional football in Scotland to resume, without putting the public or others at unnecessary risk.

“It is up to the football authorities, clubs and individuals within those clubs to take responsibility to ensure that these protocols are followed rigorously. Unfortunately, over the past few weeks, we have seen multiple  examples where that hasn’t happened.

“This latest example indicates that the current arrangements are not working as intended, and so clearly additional steps now need to be taken to ensure that the necessity of strict compliance with the rules is fully and properly understood.”

Police Scotland revealed in a statement that a fixed penalty notice had been issued to Bolingoli for breaching quarantine regulations.