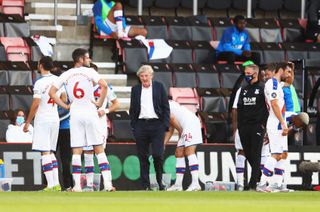 Roy Hodgson is determined to help Crystal Palace finish higher than 10th in the Premier League after Saturday’s routine victory at Bournemouth.

The Eagles returned to top flight action with a 2-0 win on the south coast after goals from Luka Milivojevic and Jordan Ayew.

It lifted Palace above Arsenal into ninth and onto 42 points, meaning they are only eight points off setting a new club record in the Premier League.

Another target for the south London outfit is to place better than 10th – something they have achieved on two occasions in the Premier League, although Hodgson insists that should be three times after he guided them to 11th in the 2017-18 campaign.

He said: “Well I still maintain we finished 10th that first year when I was at the club when we had the same number of points with Newcastle and they pipped us on goal difference.

“That was a level 10th for me, which I was quite satisfied with. We would like to push on and go a bit further of course, but I think one of the problems we are going to find is the squad is quite small. It is limited.”

Palace were without Martin Kelly, James Tomkins and Jeffrey Schlupp at the Vitality Stadium and Hodgson admitted they all could be absent for the remainder of the term.

“We have lost three very important senior first-team players and it’s unlikely we’ll get more than one of them back in the coming weeks,” the 72-year-old added.

“It is going to be a major challenge for the small group of players we’ve got to get through so many games in such a short period of time.”

Relegation-threatened Bournemouth struggled to create chances against Palace, but most of their good work occurred through David Brooks.

The Welsh winger made his first appearance for the Cherries in 14 months after a long-term ankle injury and caught the eye.

“It was great to see him back,” Eddie Howe said. “There was an element of rustiness in his game, which is to be expected, but I think there were signs and moments of what he will bring the team.

“I am delighted he came through that period of time hopefully unscathed. There was a bit of cramp for him, but physically that is to be expected.

“He hasn’t done a huge amount of training with the team, but we know how big he is going to be for us.”

While Brooks should be fine to feature at Wolves on Wednesday, Joshua King could struggle after he was forced off with an ankle injury.

Howe described the issue as “a huge concern” and admitted Bournemouth have to improve in midweek if they are to move out of the bottom three.

He added: “The league is so tight if you look down there one or two results can change things very quickly.