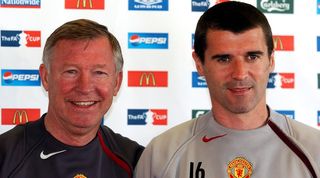 But the ex-United captain left the club abruptly in 2005 after falling out with Ferguson.

The pair's relationship deteriorated further when the legendary manager was critical of Keane in his 2013 autobiography.

The Irishman hit back in the aftermath of the book's release and has now accused Ferguson of working in the best interests of himself rather than the club.

"People talk about Ferguson's man-management," Keane told Off The Ball. "Don't be kidded on by all of it. I was at the club when Bryan Robson left, when Steve Bruce left, two brilliant servants for Manchester United, and I didn't like the way they were treated."

Keane's own departure came about after an argument with Ferguson over an interview Keane gave to MUTV in which he criticised several of his team-mates.

But the former midfielder has defended his conduct and insisted he had to stick up for himself when confronted by his boss.

"We'd had loads of heated discussions over the years, sometimes as a team, but you've got to roll with that. We're grown men fighting for the same thing. There's going to be a bit of argy-bargy but I'm sure there are people here working in industries where things get heated.

"I didn't leave the office that day [in November 2005] thinking this was the end of my career at Manchester United, but if you think I'm going to sit there, I don't care if its Alex Ferguson or the Pope... I'm going to fight my corner.

"Ferguson came out afterwards and said he always did what was best by Manchester United. Nonsense. His son Darren played for the club and won a league medal. [He was] very lucky. [Ferguson's] brother was the chief scout for Manchester United for a long time. I'm surprised his wife wasn't involved in the staff somewhere.

"Darren was [the manager] at Preston North End and lost his job. He had a couple of young players on loan from Manchester United, [but] guess what happens the next day? They're pulled out of Preston. Is that doing the best for Manchester United? Do me a favour."

Keane is currently out of work after leaving his post as Republic of Ireland assistant manager in 2018.