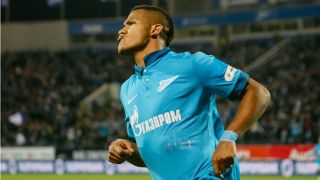 The Venezuelan put the league leaders in front with a header in the closing stages of the first half, before doubling his tally with a driven effort from a tight angle after 70 minutes.

Rondon made it three eight minutes later with a composed close-range finish, becoming the league's top goalscorer on 10 with his second treble of the campaign.

The attacker's hat-trick comes on the back of a brace in a 3-0 win over PSV in the UEFA Europa League last month, which sent Zenit into the last 16 with a 4-0 aggregate victory.

Dinamo Moscow's 3-1 win over Ufa sees them stay within two points of CSKA, while Krasnodar earned a first win in three with a 3-1 triumph at Spartak Moscow.

Rostov remain rooted to the foot of the table thanks to a 1-0 defeat at home to Lokomotiv Moscow, but are level on points with Arsenal Tula, who lost 1-0 to Rubin Kazan.