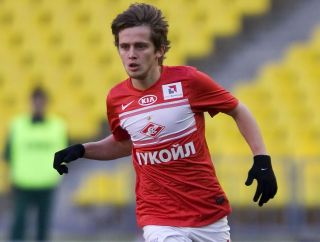 Spartak Moscow were held 0-0 at home by Rubin Kazan on Sunday – Rubin’s third consecutive goalless game – and the hosts were dealt a further blow after the game as key defender Salvatore Bocchetti was ruled out for six months with a knee injury sustained in the clash.

Rostov, playing the final game of the weekend, knew they would go top with three points against Volga, and delivered emphatically.

After a stalemate first half, goals from Jano Ananidze, Timofey Kalachev, Artem Dzyuba and Yoo Byung-Soo after the break sealed a fine win for Miodrag Bozovic’s side.

CSKA Moscow are now on the same points (11) as Spartak Moscow in third after Ahmed Musa struck the only goal in Sunday’s 1-0 win over Kuban Krasnodar – the Nigerian attacker’s third goal in five games.

Anzhi Makhachkala’s woes continued as they were thrashed 3-0 away to last season’s runners-up, Zenit St Petersburg.

The Dagestan outfit have sold a number of first-team stars as they look to abandon the high-spending ways that brought stars such as Samuel Eto’o and Roberto Carlos to the club.

Eto’o remains with the club for now, but with doubts swirling over his future, Roman Shirokov, Hulk and Cristian Ansaldi scored the goals to seal an easy Zenit win.

Lokomotiv Moscow are also in the early contention at the top, sitting level points with Zenit, but behind Luciano Spalletti’s side on goal difference in fifth.

A tight 1-0 win over Terek Grozny was enough for Lokomotiv, who had Alexander Samedov to thank as his 92nd-minute effort snatched the points in Chechnya.

The weekend also saw the first win of the season for Krylya Sovetov, who moved out of the relegation spots after a 61st-minute goal for Ibragim Tsallagov was enough to beat rock-bottom Tom Tomsk.

Ural and Amkar Perm played out a goalless draw on Saturday, while Krasnodar and Dinamo Moscow also shared the spoils on Sunday as Andrei Panyukov struck in the final 10 minutes to cancel out Wanderson’s early effort.