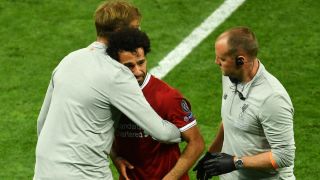 Liverpool star Mohamed Salah said leaving the Champions League final with a shoulder injury was the worst moment of his career as he was left fearing for his place at the World Cup.

Salah left the Kiev pitch in tears last month after tangling with Real Madrid captain Sergio Ramos in the first half of Liverpool's 3-1 defeat.

It was an injury that sent shockwaves through Egypt ahead of the World Cup in Russia, though national team boss Hector Cuper has been hopeful that the Premier League Golden Boot winner will be fit for the showpiece tournament.

Reflecting on what transpired against Madrid, Salah told Marca in a preview of the interview: "Leaving the final was the worst moment of my career."

Egypt will open their World Cup Group A campaign against Uruguay on June 15.

"I began to think that I would miss the World Cup, it was devastating," Salah said.

Egypt will also face hosts Russia and Saudi Arabia as they prepare to end their 27-year wait to compete at the World Cup.

"For us to qualify for the World Cup is almost like Spain winning the title," Salah added.