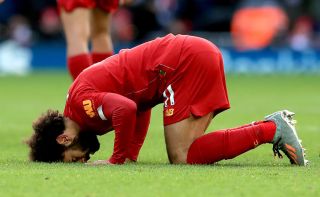 For the second time in four days Liverpool forward Mohamed Salah showed a touch of class to score two brilliantly different goals as the Premier League leaders made it 16 wins out of 17 in a 2-0 win over Watford.

Neither may have had the pin-point precision of his narrow-angle effort against Red Bull Salzburg in the Champions League, but his lofted finish over goalkeeper Ben Foster oozed quality, while his clever 90th-minute backheel showed quick-thinking.

Quality was something of a rare commodity in the early kick-off at Anfield as the visitors made life difficult and could arguably have taken at least a point from Nigel Pearson’s first match in charge with better finishing.

Salah showed them how it should be done with his fourth goal in three games – taking his tally to 13 for the campaign – and his eighth in five appearances against the Hornets.

Watford have scored only nine Premier League goals this season and on the evidence of their first half it was easy to see why as only a comedy of errors prevented them taking the lead.

In only the sixth minute Troy Deeney went with the wrong foot in trying to convert a cross from Ismalia Sarr and missed from eight yards.

Worse was to follow as Will Hughes skimmed a shot wide with three team-mates in close proximity before the circus really came to town as both Abdoulaye Doucoure and Sarr had embarrassing mis-kicks in front of goal.

By the time the latter had shinned it after Alisson Becker had parried Gerard Deulofeu’s shot, Liverpool were ahead with a clinical counter-attack.

They broke from a Watford corner, won as a result of the Doucoure miss, with Roberto Firmino releasing Mane down the left.

He in turn put Salah through one-on-one with Kiko Femenia and the Egypt international cut back onto his right foot before curling a shot up and over Foster which, judging by the spin of the ball, appeared to be wind-assisted.

It was the one moment of quality in a half which saw the hosts dominate possession but struggle to break down opponents who retreated 11 men to within 40 yards of their own goal when out of possession.

One driving run from Mane through the inside-left channel broke through those defences but Jordan Henderson blazed well over from the cross.

Mane was also put off by Foster charging out of his goal to force a heavy touch after Salah had held off two defenders to play his team-mate through on goal.

Alisson made two good saves early in the second half, one from Sarr and the other from Deulofeu – in between much Mane had his powerful, flicked header from Xherdan Shaqiri’s cross ruled out after VAR adjudged his hip was fractionally offside.

Liverpool’s injury worries – they are already missing centre-backs Joel Matip and Dejan Lovren and midfielder Fabinho – deepened when Georginio Wijnaldum was forced off with an apparent hamstring problem.

If Watford were their own worst enemies in the first half it was Liverpool’s turn after the break with over-complication in the penalty area seeing Firmino and Salah spurn chances.

But the worst incidence came 10 minutes from time when Virgil Van Dijk side-footed a 20-yard back pass past Alisson and could only watch with relief as the ball trickled past the post.

Warmer climes now beckon as Liverpool head to Qatar for the Club World Cup, meaning they miss next weekend’s action and will have a match in hand of their rivals.

By the time they return their lead may have been cut to five points but they will remain top of the tree at Christmas as their quest for a first title in 30 years gathers pace.