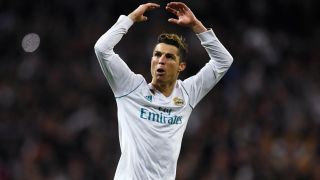 Real Madrid great Michel Salgado said he would be "hurt" if Cristiano Ronaldo leaves the LaLiga giants and he is concerned the superstar is heading for an exit.

Ronaldo, 33, is linked with a stunning €100million move from Madrid to Juventus, with the deal reportedly close to completion.

Salgado, who won four LaLiga titles and two Champions League crowns with Madrid, said he was worried Ronaldo was departing.

"Personally, if he is going, it will hurt me because I have been with him for six months," he said on Monday.

"He was leaving his mark in Real Madrid or he is still doing it, but I know him pretty much, and when he takes a decision he goes ahead no matter the consequences.

"But, if Cristiano is not going, we will have him for the biggest moments because he is a phenomenon. But if he finally decides to go, we have to wish him all the best and thank him for everything.

"I am worried that he is going but that is a personal decision and lowering the release clause worried me as well."