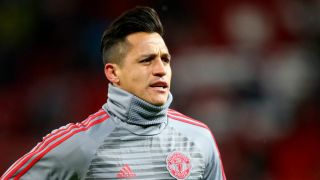 Alexis Sanchez joined Romelu Lukaku on the sidelines for Manchester United's clash with Brighton and Hove Albion, while Marcus Rashford was handed a start up front.

But reports emerged on Friday that Sanchez had also not travelled to Brighton and confirmation arrived with the news that Rashford – often deployed out wide – had been handed a central striking role.

Mourinho made six changes in all, with Matteo Darmian, Marcus Rojo, Juan Mata, Anthony Martial and last week's match-winner Marouane Fellaini joining Rashford in the side.

Antonio Valencia missed out on the squad, while Victor Lindelof, Ander Herrera and Jesse Lingard dropped to the bench.

Brighton made two changes to the side that drew at Burnley last time out, with Davy Propper and Glenn Murray back in the side at the expense of Beram Kayal and Leonardo Ulloa.