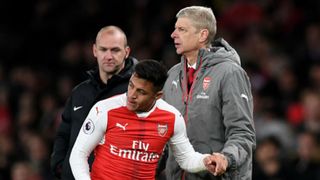 Jens Lehmann and Lothar Matthaus both believe that Bayern Munich making a potential £55million bid to sign Arsenal star Alexis Sanchez would be a positive move.

Forward Sanchez has one year left on his contract at Emirates Stadium and has been heavily linked with an exit at the end of the season, with the German champions reportedly among the frontrunners in the race for his signature.

Ex-Arsenal goalkeeper Lehmann thinks the Chile international would be a good fit at Bayern, even though he represents a different proposition to their usual target.

"He would fit in at Bayern, although he is not the typical wide player they are seeking," Lehmann said to Sky Deutschland.

"He likes to cut inside, I have seen players that make better decisions on the pitch, but perhaps he can learn that.

"He is a street footballer, you notice that when he is on the pitch. Playing him in a system is not so easy but it would be nice to see him in the Bundesliga."

"He is a player that could follow in the footsteps of Ribery and Robben, but he wouldn't have to hide behind any of them," said Matthaus.

"He is dangerous in front of goal and can play in a wide range of offensive positions.

"Bayern have only one genuine number nine with Lewandowski at the moment. Adding the option of Sanchez would improve their attacking quality."

Sanchez plans to discuss his future with manager Arsene Wenger once the 2016-17 season is over, but revealed on Sunday the desire to win the biggest trophies would be a factor in his decision.