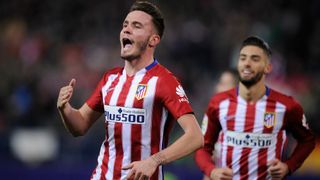 Rising Atletico Madrid star Saul Niguez says he would love to spend his entire career at the Vicente Calderon.

The versatile attacking midfielder, 21, has been linked with a potential switch to Manchester United in recent days, with his buyout clause rumoured to be as low as €26million.

But Saul, who has made 22 appearances in all competitions this season, is relishing his strong form for Atletico and has set his sights on winning silverware in Spain - beginning with La Liga.

"I've achieved a lot. It's a very special feeling. My biggest dream is to be at the club all my life and continue to win titles," he told Sportium News.

"I'm going through a great moment and it shows on the pitch. I'm happy for the goals but mostly because the teams benefits.

"We have shown we're capable of fighting for the league and even winning it, but it's very even and any team can give you a scare.

"The work we do every day will determine how far we go and if we have the league in our sights we'll go for it until the death."

Saul, who was given his debut by Diego Simeone, spent time on loan at Rayo Vallecano as he initially struggled to break into the first team, but he has praised his coach for his guidance.

"He gave me my debut and was very sincere when he said I had to leave on loan to get more minutes and continue to develop. Time has proved him right," he added.