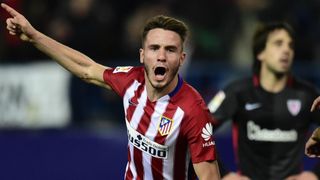 Speculation that Atletico Madrid midfielder Saul Niguez could join Manchester United has been dismissed by the player's father.

Louis van Gaal's team were reported to be monitoring the 21-year-old, who has enjoyed a breakthrough campaign with Diego Simeone's Liga leaders this season.

Saul himself declared on Tuesday that he would happily spend the rest of his career at the Vicente Calderon and Jose Antonio Niguez, a former footballer with Elche, also denied his son had any desire to leave the Spanish capital.

Niguez senior also stated Saul has a release clause of  €45million in his Atleti contract – considerably higher than the figure claimed to have piqued United's interest.

"I just heard about this through the newspapers and the TV, we knew nothing," Niguez told Deportes Cope.

"He has always said he wants to succeed at Atletico Madrid. Saul's release clause is €45m.

"The kid is happy at the club, they are counting on him, the team is doing well, top of La Liga. A lot of things would have to happen for him to leave."

Saul spent the 2013-14 season on loan at Rayo Vallecano but is now an established first-team fixture at Atletico and has a long-term contract running through until June 2020.

"The coach is counting on him, he has his confidence," his father added.

"Logically things [can] change radically, because a player aged 21 who is not playing, he needs to look at other things.

"If he is not playing, it is logical for him not to be happy. But at the moment everything has changed, he is very happy with what is happening with the team, he is playing, and the team is doing well."