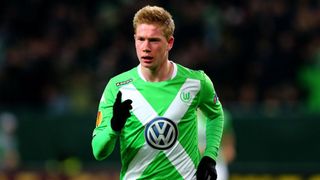 De Bruyne has racked up 14 goals and 21 assists in all competitions this term, with Wolfsburg sitting second in Germany's top flight and in the quarter-finals of the UEFA Europa League.

Such figures have led to speculation that a number of leading European clubs are considering a move for the Belgian, with Manchester City and Manchester United both reportedly keen to take the former Chelsea man back to England.

But Schafer thinks the 23-year-old is happy at Wolfsburg.

"I think that our chances [of keeping De Bruyne] are really good," he said.

"He has already experienced not getting so much time on the field at Chelsea, which is top club in Europe.

"And that is why I think the best thing for him would be to stay for minimum one more year at Wolfsburg.

"Next year he could play Champions League here and win titles with us.

"If you want to win titles you need extraordinary players. And you really have to say that Kevin De Bruyne is at the moment the best player in the Bundesliga not only because of his stats.

"You can see that in every single game. And we're really, really happy to have him and to keep him till the next season or maybe a little bit longer."