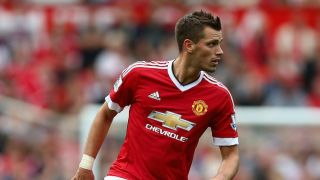 Manchester United midfielder Morgan Schneiderlin was one of those to miss training on Monday although Memphis Depay took part in running drills at Carrington.

The Premier League side take on CSKA Moscow in the Champions League at Old Trafford on Tuesday, with manager Louis van Gaal set to offer fitness updates on the likes of Schneiderlin and Depay at his news conference on Monday.

However, the former Southampton man was not involved at Carrington, despite playing all of Saturday's 0-0 draw with Crystal Palace, although Depay exercised with team-mate Phil Jones.

The Netherlands international was ruled out of the weekend's stalemate with Palace due to a knock.

Van Gaal's men have struggled for goals of late but sit second in Group B - two points behind Wolfsburg and level on points with CSKA in third.