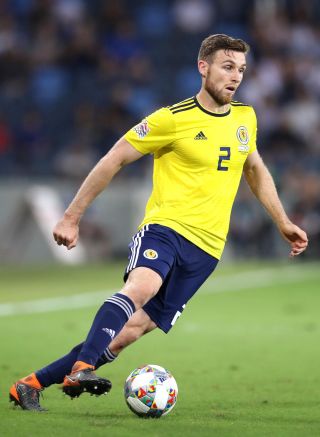 Speculation about the manager’s future has subsided since the shock 3-0 defeat in Kazakhstan in the opening 2020 European Championship qualifier last month, which came before the 2-0 away win over San Marino.

However,  it remains to be seen whether the former Scotland defender will still be at the helm for the qualifying double-header at home to Cyprus and away to Belgium in June.

Kilmarnock right-back O’Donnell was given his Scotland debut by McLeish in Peru last summer and won his seventh cap in “a very convincing win” against San Marino, after sitting on the bench in Astana.

The 26-year-old noted Scotland have failed to qualify for a major tournament since the 1998 World Cup finals in France.

He insists there is unfair negativity around McLeish, who last year took the Scots to the top of their Nations League group, which offers another route to Euro 2020 through next year’s play-offs.

O’Donnell said: “People are entitled to their opinion. Do I think it is fair? No, because as much as Alex McLeish is the manager, we as a squad need to take responsibility.

“Alex McLeish gave me my debut and I owe him a hell of a lot and he has done a good job.

“His objective was to get through the Nations League, he done that and it is two games in and there’s a crisis.

“So I don’t really understand why there is so much negativity.

“I understand the frustration with the (Kazakhstan) result, it was a poor result.

“But at times it has come across as a wee bit of a witch-hunt against him, especially the media.

“We haven’t been. That’s fact. That’s not Alex McLeish’s fault. There is a whole host of faults but everybody just wants to blame Ian Maxwell (SFA chief executive), blame Alex McLeish.

“I don’t know who you blame. Maybe we are not good enough as players throughout the 20 years.

“I know there has been a hell of a lot of good players in that time but I think it needs to be a wee bit calmer but then again, I’m a novice in this environment.

“I am just enjoying playing, being involved in the games and I hope it continues as long as possible.”

Indeed, O’Donnell, stressed that he is as keen as ever to add to his cap total.

And amid ongoing debate around some players’ commitment to the Scotland cause, he spoke of the devastation he felt having to withdraw from the squad for the Nations League double-header with Albania and Israel in November.

The former Partick Thistle and Luton defender said:  “There was nothing I could do. I was injured. I was still devastated.

“Thankfully I wasn’t missed and it was two great results against Albania and Israel but that was one of the most disappointing days of my career when I realised I couldn’t be involved.

“Every time I am in the squad it is an honour and I just hope it can continue as long as possible.”