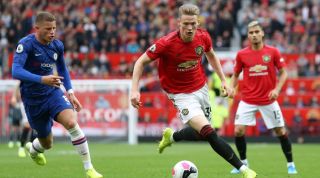 James arrived from Swansea City this summer for £18 million and quickly struck up a rapport with Scotland international McTominay at his new club.

The 21-year-old made an instant impact by coming off the bench to score Manchester United’s final goal in their 4-0 rout of Chelsea at Old Trafford on the opening day of the season.

“I’ve had a really close bond with him since he’s come to the club,” McTominay told the BBC.

“I was so, so pleased for him. That was probably one of the happiest I’ve been on a football pitch, seeing one of my pals score his first goal for the club because I was just made up for him.

“When I got home, I sent him a little text and said well done. He deserves it, he’s such a hard-working lad, but he knows it’s only the start.

“He says it’s not just one goal that can be big for you, it’s getting 50, 100, and he’s very capable of that. As you’re seeing he’s done really well at the start of his Man United career.”

McTominay also revealed his astonishment at featuring on the front cover of Pro Evolution Soccer 2020 alongside Lionel Messi, Miralem Pjanic and Serge Gnabry.

“It’s mad isn’t it? I don’t really know (how it feels), I haven’t really thought about it yet. Whenever I see myself in ASDA on the side I’ll be like ‘pffft’…

“It’s a good experience and obviously amazing to be on the front cover of such an iconic game. It’s one of those things you have to relish and embrace at the time.”