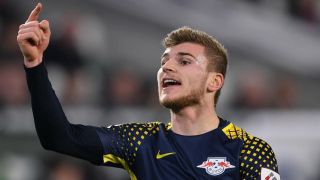 Timo Werner leaving RB Leipzig in the near future would be an "unimaginable" step, according to the club's managing director Oliver Mintzlaff.

The 21-year-old striker has developed into one of Europe's most promising players since joining Leipzig from Stuttgart at the start of last season.

Werner has eight goals in 15 Bundesliga appearances this term, continuing his strong form from last season when he netted 21 times in 31 games.

Unsurprisingly, the Germany international has been linked with a number of bigger clubs, such as Bayern Munich and Real Madrid, but Leipzig are adamant that they are not entertaining the prospect of selling him, even if he goes on to star at the World Cup.

"Timo is an extremely important player for us, the face of the club," Mintzlaff told Bild.

"He has taken very big steps with us and we plan continue in the long term, anything else is unimaginable today.

"Of course, we cannot shy away from the market and if someone plays a good World Cup, then we're obviously happy for them, but a contract is a contract.

"We are not - and will not be - a selling club and in the medium term we aim to establish ourselves among the top clubs in Germany."

Although Leipzig - who returned to training on Tuesday - went into Germany's winter break in poor form, failing to win any of their last four games, the club remain happy with the job coach Ralph Hasenhuttl is doing and have already scheduled talks regarding the future.

"Ralph is a great person and a great coach," Mintzlaff added. "He has a contract with us until 2019.

"Just before Christmas, we talked to him and made an appointment for the spring [between March and June] to talk about the future.

"It works for him as well. We will then look for solutions for a common future, but we will not have any pressure and will not let ourselves be driven to that."