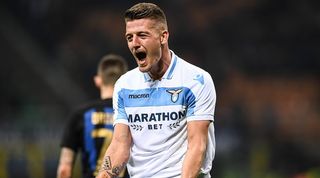 Manchester United have offered £72.3m for Sergej Milinkovic-Savic, but Lazio are holding out for £90m.

According to Sky Italia, the Biancocelesti are set to reject United’s bid for the Serbia international, who has also been linked with PSG, Inter and Juventus.

Lazio have lowered their asking price from last summer, when they demanded £108m for the attacking midfielder.

Ole Gunnar Solskjaer is keen to add to his pool of midfielders ahead of next season, with Ander Herrera having joined PSG and Paul Pogba heavily linked with a move away from Old Trafford.

The Norwegian is a big fan of Milinkovic-Savic, who scored five goals and provided three assists in Serie A last term.

However, United will have to increase their offer if they are to land the 24-year-old this summer.