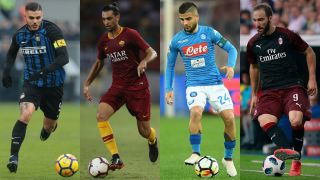 When Cristiano Ronaldo touched down in Turin, it sparked pandemonium in northern Italy, but drew a collective gasp from Juventus' rivals.

Already enjoying a stranglehold on Italian football, the seven-time reigning Serie A champions had just signed one of the all-time greats from Real Madrid.

The addition of Ronaldo to a squad overflowing with quality – plus the arrivals of Emre Can, Joao Cancelo, Mattia Perin and the return of Leonardo Bonucci – has Juve as favourites yet again to claim an eighth successive Scudetto, though the Bianconeri's transfer business also has Massimiliano Allegri primed to deliver a coveted European crown.

Juve have only won two Champions League titles having lost five finals since 1996, so Ronaldo's arrival has the club fighting on all fronts as they bid to transfer their domestic dominance to the continental stage.

However, rivals Napoli, Roma, Inter, Lazio and AC Milan have reasons to be optimistic thanks to significant investment of their own. Whether it will be enough to overhaul Juventus is uncertain, but the 2018-19 campaign looms as one of the most exciting yet.

There is a lot to be excited about at Stadio San Paolo as Carlo Ancelotti ushers in a new era. Maurizio Sarri came closest to dethroning Juve last season, his entertainers finishing runners-up for the second time in three seasons.

While 'Sarri-ball' is no more in Naples, Aurelio De Laurentiis may finally have the man in Ancelotti to restore the Diego Maradona-inspired glory days of 1987 and 1990. Back in Italian football for the first time since 2009, the former AC Milan boss and three-time Champions League winner knows what it takes to conquer Serie A, Ligue 1, Bundesliga and the Premier League.

Napoli may be a different beast to Ancelotti's Rossoneri and are missing the creativity of Chelsea recruit Jorginho, but the 59-year-old's side are equipped with enough quality in Lorenzo Insigne, Marek Hamsik, Dries Mertens and Kalidou Koulibaly to challenge. The only question mark, as it was last season, is over Napoli's depth and rotation, even after the signings of Fabian Ruiz, Simone Verdi and Alex Meret, while the departure of goalkeeper Pepe Reina also leaves a hole.

Monchi's fingerprints are all over Roma's squad this season. Eusebio Di Francesco's men defied the odds to reach the Champions League semi-finals last term but it came at a cost.

Their success meant stars were under the spotlight and Alisson was lured to Premier League giants Liverpool in an offer too good to refuse. Fan favourite Radja Nainggolan was also sold much to the annoyance of Roma's supporters.

It is another fresh start for Roma, just like it was when Mohamed Salah, Antonio Rudiger, Emerson Palmieri, Hector Moreno and Leandro Paredes left in 2017-18, but the Giallorossi are well positioned to build on their third-placed finish.

A new contract and an influx of signings mean there can be no excuses for Inter boss Luciano Spalletti.

The 2017-18 campaign promised so much following Spalletti's arrival from Roma and a 16-match unbeaten streak to open the season, however Inter then went seven games without a win to see their Scudetto hopes fade.

Inter managed to scrape into the Champions League for the first time in seven seasons with a dramatic win over Lazio on the final day of the season to clinch fourth spot and the Nerazzurri have carried that momentum into the transfer market with the acquisitions of Nainggolan, Lautaro Martinez, World Cup runner-up Sime Vrsaljko, Keita Balde, Stefan de Vrij, Matteo Politano and Kwadwo Asamoah.

The Suning Group have backed Spalletti with loads of cash, now he must deliver and mount a sustained title challenge – Inter having not won the Scudetto since 2010.

The red and black of Milan have the most ground to make up but belief is growing within the San Siro and its surrounds. From stumbling to sixth position last season and being kicked out of the Europa League for this term, Milan have now given fans reasons to be excited thanks to Leonardo and the new board.

With Elliott Management now in control and sporting director Leonardo overseeing an overhaul, a tumultuous off-season has been flipped on its head thanks to some wise investments. Bonucci wanted a return to Juve after just one season but Milan managed to bring in a younger and promising Italian defender in Mattia Caldara to partner star centre-back Alessio Romagnoli. More importantly, the club addressed their need for a genuine goalscorer thanks to the blockbuster deal for Gonzalo Higuain.

The arrival of Tiemoue Bakayoko on an initial loan from Chelsea adds some quality in the midfield and offers the Frenchman the chance to rediscover his Monaco form, while the imminent arrivals of Diego Laxalt and Samu Castillejo will provide upgrades in the wide positions.

Milan are still some way off rising to the summit of Italian football but the future is bright with Gennaro Gattuso, Gianluigi Donnarumma, Romagnoli and Higuain.

Simone Inzaghi continues to work wonders in Rome and Lazio will need another herculean effort as those around them splash the cash.

Lazio were on the verge of qualifying for the Champions League until their heart-breaking defeat on the final day of the season.