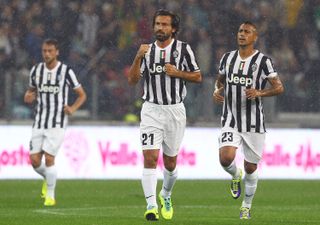 Juve moved level on points with Napoli in second – and just two points behind leaders Roma – after coming from behind to defeat Milan in Turin.

Sulley Muntari had fired Milan in front in the first minute, only for Andrea Pirlo to cancel out his effort with a superb free-kick.

Sebastian Giovinco then put Juventus in front with 21 minutes to play, finishing well just inside the box, before Milan defender Philippe Mexes was sent off.

Another Pirlo free-kick delighted the home fans with 15 minutes left, but this time his effort hit the post, with defender Giorgio Chiellini first to react, scoring from close range.

And although Muntari set up a nervy finish with a stoppage time goal, Antonio Conte's side held on for victory.

The defeat leaves Milan level on points with Livorno in 12th after they were thrashed 4-0 at Napoli.

Goran Pandev and Gokhan Inler scored in the first 30 minutes for Napoli, with Dries Mertens providing the assists.

And Jose Callejon and Marek Hamsik netted after the break to give Rafael Benitez's side another victory.

Hellas Verona climbed to fifth with a 4-1 win at Bologna as the newly promoted side continued their impressive form.

Goals from Fabrizio Cacciatore and Juan Iturbe had given Hellas Verona a 2-0 lead at half time, and although Alessandro Diamanti scored a penalty for Bologna, further strikes from Luca Toni and Jorginho sealed their win.

Sampdoria remain in the bottom three after a 2-2 draw with Torino but were left reeling after they had a goal disallowed as the referee blew the whistle for half time just seconds before they scored.

Delio Rossi's winless side were 1-0 up at the time, but referee Andrea Gervasoni ruled out Nicola Pozzi's effort.

And they failed to hold their lead, with Ciro Immobile and Alessio Cerci putting Torino in front with second-half goals.

Sampdoria did manage an equaliser though, as Eder's stoppage time penalty helped them at least secure a point.

Other results saw goals from Danilo and Antonio Di Natale help Udinese to a 2-0 win over Cagliari, while Parma beat struggling Sassuolo 3-1.

And Lazio and Fiorentina played out a goalless draw, while the spoils were also shared between Catania and Genoa, which finished at 1-1.