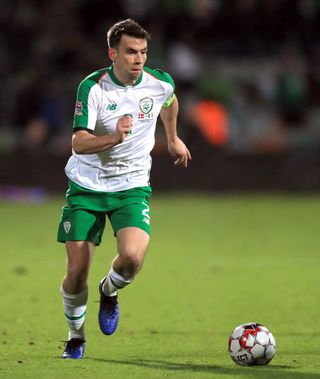 Seamus Coleman has warned the Republic of Ireland not to be taken in by the absence of Switzerland’s talisman Xherdan Shaqiri as the sides go head-to-head in the battle for Euro 2020 qualification.

The Liverpool schemer has made himself unavailable to his country for the current round of fixtures to concentrate on his club career, leaving international boss Vladimir Petkovic with a significant gap to plug.

Ireland striker David McGoldrick earlier this week professed himself to be “buzzing” at the news when it emerged, although his captain was more circumspect when asked about it on the eve of a key game in Group D.

Coleman said: “Look, he’s a dangerous player. He’s one of those who can turn it on and score a goal before you know it. Obviously it’s a boost for us that he’s not playing.

“But a team of quality will have people to come in and replace him. I know it’s boring, but we just need to concentrate on ourselves.

“It is a bit of a boost, but we need to focus on ourselves.”

Coleman, who captained Ireland at the Euro 2016 finals, is well aware of the significant step forward they could take towards the next edition with victory over the Swiss, but insists he and his team-mates are thinking no further ahead than the next 90 minutes.

He said: “It’s a massive game, but without being boring with my answer, you have to take just one game at a time and thankfully so far in the group, we’ve got what we wanted to get.

SC: It's got that feeling of a big game. Every time you put on the green jersey it's a great feeling. I'm really looking forward to it." 💚🇮🇪#IRLSUI#COYBIGpic.twitter.com/RSNJ591iJz— FAIreland ⚽️🇮🇪 (@FAIreland) September 4, 2019

“A point away to Denmark was good and now we go into tomorrow night’s game wanting all three points and if we get that, we’ll just look to the next game.

“It would be a great head start, but we know it’s a tough group. But we’re really, really looking forward to tomorrow night and hopefully getting the three points.”

The task ahead of Ireland, who currently top the group with 10 points from a possible 12, is reflected by the relative positions of the two teams in the latest FIFA rankings.

The Swiss sit in 11th having dropped two places, while the Republic are 32nd and, though a 1-1 draw in Denmark in June boosted Mick McCarthy’s hopes of guiding the Irish to another major tournament finals, he knows the degree of difficulty has increased significantly in the second half of the campaign.

Asked if the Switzerland game is the biggest since his return to the job he vacated in 2002, McCarthy replied: “Oh of course, yes, without a doubt, yes.

“We’ve had our first games – we’ve done well in those – but Switzerland and Denmark are arguably the best two teams and we’ve got one of them playing tomorrow night.”

The Republic’s hopes of collecting another win to go with those they have already achieved against Gibraltar home and away and Georgia in Dublin could depend largely on whether or not one of McCarthy’s pool of strikers – McGoldrick, Callum Robinson, who sat out training as a precaution on Wednesday morning, and Scott Hogan – can break their international duck.

However, the manager is not concerned about where the goals come from as long as they come.

He said: “I’m not bothered where they come from, but I think the strikers might argue that. They’d like to score the goals.

“But if they come off and we’ve won, I don’t think anybody’s bothered, and that will be the same tomorrow night if we win. Nobody will be bothered who scores.”