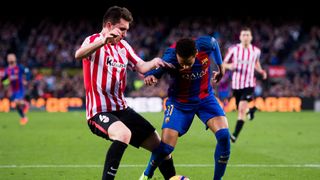 Athletic Bilbao defender Aymeric Laporte has been struggling to sleep as he reportedly nears a €65million switch to Manchester City.

The Premier League leaders are understood to be on the verge of making Laporte their record signing by meeting the release clause in his Athletic contract.

A move to bring in the left-footed central defender collapsed early on in Pep Guardiola's tenure but the City manager has remained an admirer.

Guardiola refused to discuss the move at a news conference on Friday but, having initially expressed an intention to play Laporte, Athletic head coach Cuco Ziganda left the France Under-21 international out of his matchday squad for the 1-1 derby draw against Eibar on Friday.

"I spoke with Laporte before the game. I did not see him in the best conditions and I decided that he was not prepared to play," Ziganda told reporters.

"I asked to him if he was fit to play and he said to me that he can't sleep normally because he has had a busy week."

Guardiola's men travel to Cardiff City in the FA Cup on Sunday and will aim to have the deal for Laporte completed before they entertain West Brom in the Premier League on Wednesday.