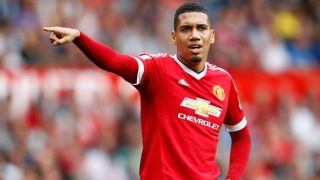 Manchester United have confirmed that defender Chris Smalling has been hospitalised.

The England international, 26, is on holiday in Bali, Indonesia, following his country's elimination from Euro 2016.

Pictures emerged on social media on Monday appearing to show Smalling lying on a hospital bed signing autographs with a bandage around his head along with a neck support.

United have confirmed this was due to Smalling fainting having suffered from food poisoning and provided an update to say the centre-back is now feeling fine.

The club's statement read: "Manchester United can clarify Chris Smalling has had food poisoning during his holiday which resulted in him fainting on Sunday.

"The 26-year-old defender was taken to the hospital and is now feeling fine."

United added that Smalling will return to the club for pre-season training later in July as planned.