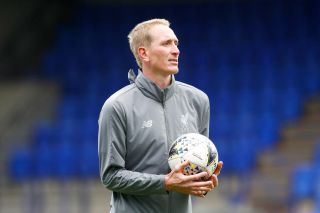 Social media trolls should face custodial sentences because of the impact their comments can have on the victim’s mental health, former Liverpool goalkeeper Chris Kirkland has said.

Kirkland has spoken out about his own struggles with mental health, and posted on Twitter last July to say he had checked into a rehabilitation centre in north Wales after historic problems flared up again.

A number of high-profile players, including Paul Pogba and Marcus Rashford, have been targeted for abuse on social media in recent months and Kirkland insists there must be greater deterrents in place to stop it happening.

I don’t want sympathy with this tweet,the reason I’m sharing this is for people to know ,it’s OK to ask for HELP ,I’m 1 week into my rehabilitation @Parkland_Place what a wonderful place ,the staff do a fantastic job in every way possible,I’m feeling great but long way to go.— Chris Kirkland (@ChrisKirkland43) July 23, 2019

“You can use it for good, but unfortunately a lot of people don’t seem to realise that. You’ve got people going on there saying ‘I wish you were dead’, ‘I hope your kid dies of cancer’.

“People can be traced and they’ve got to make examples of these people – I’m talking jail sentences. That’s the only way you’re going to stop it. At the minute you can put anything on.

“I was at the gym a couple of months ago and a lady said to me ‘I just want to say thanks for coming out and talking, my son was having a bad time at school with bullies on social media’.

“I thought her son must have been 18 or 19 or something – the lad was nine. He tried to hang himself at home.”

Kirkland’s comments come as English and Scottish football prepare for the first of two Heads Up weekends, where it is hoped the game can act as a starting point for conversations around mental health.

Kirkland welcomed the campaign, and says he often has players contacting him as a first port of call when they do not feel comfortable speaking to their clubs.

“I’ve been to see players, speak to them on the phone, some are not ready to do anything about it yet, some will,” he said.

“It can be addictions, trauma, people struggling with injuries who have been out for long periods.

“It really varies – pressures of playing the game, it’s everything you can imagine.”

Kirkland says he first began to struggle after leaving Wigan for Sheffield Wednesday in 2012.

“Since moving up to Liverpool in 2001 we lived in the same area, everything was fine,” he said.

“All of a sudden I had to start travelling, I wasn’t comfortable being away from home for long periods. I’d get stuck in traffic and there were panics. It started with that really.

“Sheffield Wednesday knew there was an issue but they thought it was with Leeona my wife, they were incredible with us. But it slowly got worse as time went on.

“I left there in 2015 even though they wanted me to sign again – and I did want to sign again because it was so good and the fans were amazing. But I knew I needed to get somewhere closer to home and I thought that would fix the problem, but it didn’t.

He played at Preston for a year before moving on to Bury, but after speaking to former Liverpool team-mate Neil Mellor he got in contact with the Professional Footballers’ Association in 2016, who helped him access counselling.

He says the counselling helped, but that he started to feel the old symptoms return after going on a golfing trip in the summer of 2019.

After being told there was a three-month waiting list to get into the Sporting Chance clinic in Hampshire, he checked himself into Parkland Place in north Wales.

“The staff are amazing. I had no intention of staying over, I wasn’t comfortable. I said ‘I want to be able to go home at night’, which they said was fine as long as I stuck to the programme,” he said.

Kirkland is about to begin work in schools and prisons for the LFC Foundation, something which is helping him to stay active.

Asked what his stay in Parkland Place had taught him, he said: “How to rationalise things. I know now that exercise is a massive thing – I need to exercise every day.

“I know not to withdraw myself, I have to get up and do something, that’s why I’m looking forward to starting with the foundation, I’ll be out a lot of the time now. I still have bad days when I feel like c**p, but I know they don’t last.”