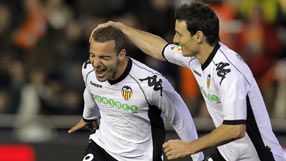 Espanyol had gone four clear thanks to a 3-2 success at Atletico Madrid on Saturday before Soldado struck in each half to lift Valencia to 24 points from 13 matches and keep them in the hunt for a lucrative place in European competition.

Unbeaten leaders Real Madrid have 32 points from 12 games ahead of Monday's "Clasico" against arch-rivals Barcelona, who are a point behind.

Villarreal won 3-0 at Real Zaragoza on Saturday and are third on 27, two ahead of Espanyol.

Soldado made the most of a slice of luck to open the scoring at the Mestalla.

A floated pass landed on the back of his head and fell kindly for the former Real Madrid and Getafe striker who took the ball inside a defender and finished low into the net.

His second came from a typically swift Valencia counter-attack.

Joaquin sent Aritz Aduriz clear on the right and Juan Mata cleverly flicked his low cross into the path of Soldado, who controlled the ball and beat Diego Alves from close range.

"I was trying to watch the defender (on the first goal) and it just hit me on the head," Soldado said in a television interview. "They all count."

Earlier, Pierre Webo and Gonzalo Castro struck just after half-time to give Real Mallorca a 2-0 home win over Malaga.

Michael Laudrup's unfancied side were barred from taking their place in this season's Europa League due to financial problems but a fine start in La Liga has lifted them to sixth.

They are one point clear of Atletico Madrid and Sevilla, who both lost on Saturday.

Castro sent Webo clear to open the scoring at the Iberostar Estadio in the 50th minute and the Cameroon striker returned the favour five minutes later for Castro to make it 2-0.

Malaga's Portuguese forward Eliseu had his penalty saved by Dudu Aouate late on.

The Andalusian club, who appointed Manuel Pellegrini this month to replace the sacked Jesualdo Ferreira, are 18th in the 20-team La Liga standings.

"Twenty-one points is already halfway to ensuring our survival in the top flight," Laudrup told a news conference.

"It's very important to open a gap to the teams below us as it creates calm," the Danish former Real and Barca player added.