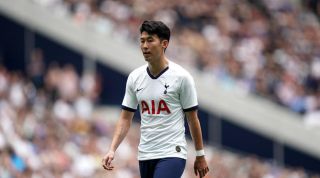 Son Heung-min says Jose Mourinho has brought a "positive vibe" back to Tottenham.

Mourinho has won each of his first three games in charge in north London after replacing Mauricio Pochettino at the helm last month.

As well as booking their place in the Champions League knockout phase with a 4-2 victory over Olympiacos, Spurs have also beaten West Ham and Bournemouth in the Premier League.

Those two triumphs have seen them climb into fifth place in the Premier League, with Tottenham now just six points adrift of the Champions League qualification spots.

And Son has praised Mourinho for the job he has done so far, ahead of the Portuguese's return to Old Trafford to face former club Manchester United on Wednesday.

"He’s very kind. He’s smiling, making jokes with the players. I like it, of course. I think the results changed a lot, the positive vibe," the South Korea international said.

“Everyone is positive before games. The gaffer is doing a great job and we are really happy with him. The atmosphere changed a lot with the positive vibes."

Although Son is enjoying life under Mourinho, he also added that he was disappointed to see Pochettino's tenure end.

But the former Bayer Leverkusen winger is now fully focused on the task at hand, starting with Wednesday's clash with United.

“It was a sad week," he said. "You don’t want to see your manager sacked. But we are professional enough. Three games, we won. The results are really positive.

“He was at United for two years, I think. We just want to keep smiling after the game when we see the fans. We want to get the best result for him and for ourselves as well.”

Lionel Messi wins the 2019 Ballon d'Or: How we've followed the best player of the last 25 years

Amazon Prime's Premier League fixtures could herald a new age of on demand football. So what will change?