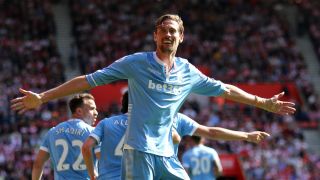 Peter Crouch became the first Premier League player to score 50 headed goals when he grabbed the winner in Stoke City's 1-0 victory over Southampton and condemned his former club to a defeat that prompted boos around St Mary's on the final day of the season, increasing the pressure on Claude Puel.

The 36-year-old striker rose to meet Geoff Cameron's cross after an hour at St Mary's and score the kind of goal that has typified his career, before Stoke goalkeeper Jack Butland pulled off a string of fine saves to ensure the visitors ended the season with a win.

Despite having Charlie Austin in the starting line-up for the first time in 2017, Puel's Southampton lacked a cutting edge in attack and the result leaves them with a record of just one victory from their last eight Premier League fixtures.

Though he has guided the club to the EFL Cup final and a place in the top half of the table, speculation suggests Puel will not be in charge at the start of 2017-18 following their collapse in form in recent months.

Stoke manager Mark Hughes had led the club to ninth place in his previous three seasons, but on a day when the Potters could have dropped to as low as 17th, he will be relieved to have emerged with a first win in five attempts. Hughes' men end the campaign 13th, two points behind Southampton in eighth.

The visitors burst out of the blocks in the opening 30 seconds of the game and Fraser Forster made a good save from Mame Biram Diouf, diving to his left to parry a powerful drive around the post.

After a lively start, the game settled down to a pace that the two goal-shy sides are more accustomed to but Glenn Whelan had to be quick to chase back and block Dusan Tadic's shot after Charlie Austin put him through with only Butland to beat.

Much of the home side's best play came when Nathan Redmond linked up with Ryan Bertrand down the left flank, and the latter's cross would have given Austin a great chance to score from close range after 34 minutes had it not been for a timely interception by Bruno Martins Indi.

Stoke rallied in first-half injury time and Diouf had a header cleared off the line before Southampton broke at the other end and a mistake by Butland allowed Redmond to lob a shot onto the top of the crossbar as the goalkeeper scrambled back towards goal.

Austin had the ball in the back of the Stoke net five minutes into the second half, only to see that an offside flag had been raised against Tadic.

But it was Stoke who made the more incisive attacks and on the hour mark Cameron sprinted down the right wing before sending a superb cross to the far post, where Crouch rose to head the ball back into the far corner of the net before Forster could react.

Butland made a brilliant double save from substitute Manolo Gabbiadini and James Ward-Prowse 12 minutes later. Gabbiadini then squandered a golden chance to equalise when he was denied by Butland in a one-on-one with 11 minutes left to play.

The heroics of Butland continued late on, as he saved with his legs from substitute Sofiane Boufal to make sure the visiting fans were providing an ovation at the final whistle, while the home supporters made their frustrations clear to Puel.