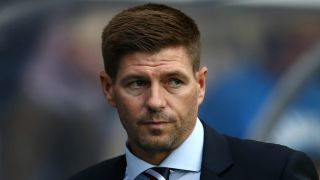 Steven Gerrard said England deserve "a hell of a reception" when they return from the World Cup, admitting Gareth Southgate's side have already achieved more than he did in 14 years as an international player.

England's run to the semi-finals in Russia was the team's best performance at a World Cup since 1990 and the first time the Three Lions reached the last four of a major tournament since Euro '96, which predates Gerrard's emergence as one of his country's finest midfielders.

Gerrard played for England at four World Cups, reaching the quarter-finals in 2002 and 2006, and the newly installed Rangers manager said he was sorry to see Southgate's men lose 2-1 in extra-time to Croatia on Wednesday.

"I'm gutted for the players," he told reporters after Rangers' 2-0 Europa League victory over Shkupi.

"I'm gutted for Gareth [Southgate] because, as everyone knows, it was an incredible opportunity to go to a World Cup final.

"But having said that, having reflected on it for 24 hours, I think you can be nothing but proud of the players and the coaching staff. They've done an awful lot better than I've ever done and we've ever done, so all I can do is tip my hat and congratulate them."

Having been part of a lauded generation of players that included Frank Lampard, Rio Ferdinand, David Beckham, Michael Owen and Wayne Rooney, Gerrard is no stranger to the pressure and expectation that many talented England players struggle to cope with early in their careers.

But the former Liverpool captain said the current squad, led by the likes of Harry Kane, Dele Alli and Jordan Pickford, could be on the cusp of a successful new era.

"I think they deserve a hell of a reception when they return," said Gerrard. "Let's hope it's the start of something big for them, but I was mightily impressed.

"Yeah, we got a bit of luck in the draw and we came up against teams that we proved to be better than. Croatia in the end were a little bit too good, and had a little bit more in the tank than us.

"But you can't be critical of what they've done, they were absolutely superb."