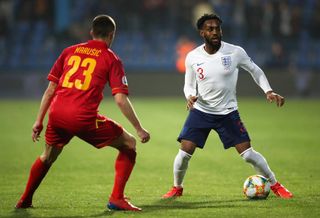 England defender Danny Rose has hit out at the punishments for racism in football, admitting he has “had enough” of the current problems in the game and “can’t wait” for his career to end.

Here, Press Association Sport takes a look back at the recent incidents which have brought the issue to a head.

A Tottenham fan was fined and banned from football for four years after throwing a banana skin at Arsenal striker Pierre-Emerick Aubameyang as he celebrated the first of his two goals during the Gunner’s 4-2 north London derby victory in December. A judge found there had been a racial motivation behind the incident.

Manchester City forward Raheem Sterling was subjected to alleged racist abuse from a section of home supporters from behind the goal as he went to collect the ball for a corner during the 2-0 defeat at Chelsea in December. Clips of the abuse were widely circulated on social media following the televised game and Chelsea subsequently suspended four people in connection with the incident, which was also investigated by the Metropolitan Police. Sterling took to social media the following day, saying he “had to laugh” when he heard the comments because he expected “no better”. He also accused the media of helping to “fuel racism” with the way in which young black footballers were portrayed.

We can confirm a report of racist abuse directed at one of our players in the final minutes of the match in Kiev from a small section of home supporters.— Chelsea FC (@ChelseaFC) March 18, 2019

Chelsea lodged a formal complaint with UEFA over monkey chants aimed at 18-year-old winger Callum Hudson-Odoi from a small group of home supporters during the closing stages of the 5-0 Europa League win away to Dynamo Kiev on March 14. Governing body UEFA later confirmed an investigation had been opened, which could eventually lead to disciplinary action against the Ukrainian club.

Thank you all for your support 💙 @ThlfcOfficialpic.twitter.com/5D50VAZqbm— Renée Hector (@renazzza) March 20, 2019

Sheffield United terminated the contract of Sophie Jones by mutual agreement after the forward was banned for five matches for racially abusing Tottenham’s Renee Hector. Defender Hector alleged she “received some monkey noises from an opposition player” during a Women’s Championship game in January, leading to Jones being charged by the Football Association. Jones denied the claim and maintained her innocence, but an independent regulatory commission found the charge proven. Jones announced her retirement from football in the wake of the punishment.

England players Rose and Hudson-Odoi were subject to racist chanting during England’s 5-1 Euro 2020 qualifying victory over Montenegro. Forward Sterling reacted to scoring England’s final goal by pulling his ears in front of home fans as a sign of defiance, later also taking to social media to address the issue head on. The Football Association described the incidents in Podgorica as “abhorrent”, while UEFA subsequently opened proceedings against Montenegro, including a charge of racist behaviour.

Kean criticised by own team-mate

Juventus’ 19-year-old striker Moise Kean was racially abused by Cagliari supporters during an away match on Tuesday and responded by celebrating a goal in his side’s 2-0 win by spreading his arms wide in defiant response to the monkey chants coming from the stands behind the goal. His team-mate Blaise Matuidi signalled he would be ready to walk off over the abuse, but Juventus manager Massimiliano Allegri and defender Leonardo Bonucci both said in post-match interviews Kean should take some of the blame for the reaction to his celebration. Their comments drew widespread criticism, although Bonucci said his comments had been “misunderstood”.