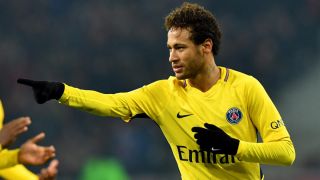 The Brazil international has been linked with a shock return to Spain at the end of the season, despite having only moved to PSG last August for a world-record fee of €222million.

Speculation the 26-year-old is unsettled in France has prompted persistent talk of a move to Madrid, who are said to be considering huge investment in the playing squad before next season after a dreadful defence of their league title.

"I don't see him at Real Madrid," he told Radio Marca.

"I wish him all the best for what he's doing, but I don't believe he's going to win everything he won with Barca."

Madrid's poor domestic form, which has left them 19 points behind unbeaten leaders Barca and saw them exit the Copa del Rey to Leganes, has increased the pressure on head coach Zinedine Zidane.

The former France star's future could come under further scrutiny if they are unable to beat PSG in the last 16 of the Champions League, the first leg of which takes place on Wednesday.

Stoichkov, however, thinks sacking Zidane would be a mistake.

"Sometimes, in football, the greats suffer," he said. "Real Madrid will need time to rebuild everything.

"Nobody doubts Zidane is a great coach but he has to have patience. Nobody can take away the titles he's won."

Barca's own charge towards another treble has been inspired by the form of Lionel Messi and Luis Suarez, and Stoichkov has been amazed by them both.

"I've never seen anything like Leo. Every day, he surprises me with something new," he said.

"I knew him when he was little and he was a humble boy, a fighter and a hard worker."

He added of Suarez: "I've always admired him. He's come through difficult moments, like the World Cup ban, which was really unfair.

"He's one of the players with whom you most identify the Barcelona shirt. He's a star."