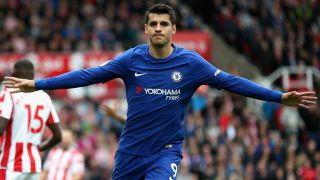 Alvaro Morata continued his stunning start to life at Chelsea with a hat-trick as the Premier League champions sealed an impressive 4-0 victory away to Stoke City.

Chelsea scored from their only two shots in the first half, Morata putting them in front after just 82 seconds before fellow Spain international Pedro netted his second goal in his last three games.

Stoke increased the pressure after the break, but former Real Madrid striker Morata doubled his tally with a brilliant solo goal to end home hopes of a revival.

And Morata then made it six goals in as many Premier League appearances for Chelsea as he sealed his hat-trick with eight minutes remaining.

Antonio Conte's side remain three points behind the two Manchester clubs at the top of the table as they continue the defence of their title.

Stoke took four points from two home games against Arsenal and Manchester United, but this heavy defeat leaves them with only one win from their opening six fixtures.

With Kurt Zouma ineligible to face his parent club and Kevin Wimmer out injured, Stoke fielded a patched-up defence that included Glen Johnson as part of the back three.

And the hosts' new backline was caught out almost immediately, with a long ball from Cesar Azpilicueta – deputising as captain with Gary Cahill on the bench – allowing Morata to race clear and beat Jack Butland with a simple finish.

After a spell of relative quiet, Chelsea pounced to make it two on the half-hour mark. Darren Fletcher's mistake proved costly, the former Manchester United midfielder chesting the ball straight into the path of Pedro, who took one touch and sent an early finish past a helpless Butland from 18 yards.

Stoke's initial response was strong and Xherdan Shaqiri should have done better with a free-kick from 20 yards, while Mame Biram Diouf's acrobatic overhead kick narrowly missed the target as the hosts went into the break two behind.

After Joe Allen sent a drive just over, Stoke tested Thibaut Courtois for the first time with Shaqiri's shot from the edge of the area.

Conte then brought on Cahill for Marcos Alonso after the wing-back got away with a challenge on Diouf shortly after being booked for a foul on Allen. Mark Hughes, meanwhile, added Peter Crouch to the mix and the veteran striker made an instant impression, setting up a stretching Diouf to fire over.

Eric Maxim Choupo-Moting had a penalty claim turned down after blocked by Cahill while the defender was on the ground at the corner of the box, before Courtois received treatment after an awkward landing from an aerial duel.

It was game over at the other end with 13 minutes remaining, as Morata capitalised on another defensive mistake. This time Johnson was guilty, his error allowing the Spain striker to gather possession just inside the Stoke half, charge into the box almost unchallenged and beat Butland from a tight angle.

A last-ditch Stoke clearance stopped substitute Eden Hazard's cross-shot from finding Morata, but the 24-year-old was not to be denied his hat-trick.

The goal of the game saw another sub Cesc Fabregas chip a precise pass into the box, which Azplicueta chested across goal for his second assist of the match, with Morata bundling in from close range.

The in-form forward almost had a fourth before the match was over, firing inches wide after another Fabregas pass before Johnson's vital goal-line clearance stopped him from converting Victor Moses' cross at the far post.

Crouch was perhaps fortunate only to see yellow for a high tackle on Fabregas, but the accolades will go to Morata, with his six goals and two assists from his first six top-flight games equalling Diego Costa's club record for goal involvements.