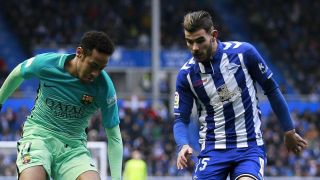 Theo Hernandez insists that beating Barcelona and Lionel Messi in the Copa del Rey final is his sole concern amid continued reports of interest from Real Madrid.

The full-back has impressed during a season-long loan from Atletico Madrid and has emerged as a reported target for the LaLiga champions.

The 19-year-old has also been linked with Barca as a possible successor to Jordi Alba, but he is determined to concentrate on Saturday's encounter at Vicente Calderon, as Alaves look to shock Luis Enrique's side for the second time this season.

"We're very happy and we're going to try to face the final with all the excitement in the world," he told Mundo Deportivo.

"I've always been in my own space. I'm relaxed and everything is totally normal.

"I don't talk about [the Madrid rumours], I talk about the final. I've just done my job, as usual. If there are big clubs, it's a reward.

"For now I'm going to continue playing as I have been. I'll continue to grow and we'll see what happens in future.

"I wanted to play this final because it's a dream for me. Of Course we can win. We won there, at Camp Nou, in LaLiga.

"Initially, I didn't think I'd be able to be where we are with Alaves. With the work and the effort of the whole team, we've reached a big final.

"I'm always excited about beating Barca. They're a great team. It's very difficult to stop Messi but we're going to do everything possible to try."

Alaves won 2-1 at Camp Nou in the league in September, although Barca did triumph 6-0 in the reverse fixture.