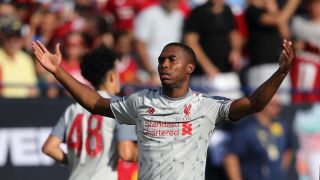 Daniel Sturridge does not regret joining West Brom on loan despite suffering Premier League relegation at the end of another injury-hit season.

The Liverpool striker made the temporary switch in January but made only six Premier League appearances, two of them starts, as he failed to score during his time at the Hawthorns.

Sturridge was out of action for two months due to a hamstring injury and, having barely featured at club level, unsurprisingly missed out on selection for the World Cup.

England reached the semi-finals of Russia 2018 under Gareth Southgate, but Sturridge retains hope of forcing his way back into the national team.

The 28-year-old also believes West Brom was good for his personal development, even if it was not a successful period on the pitch.

"It was good. I don't regret anything," Sturridge told reporters. "The experience made me grow as a person. That is what it is all about - evolving as a man, evolving as a footballer.

"From the outside looking in, you can also improve. When you are on the inside looking out, you sometimes don't get to see what you have to do to get to the next level – how you need to change your game.

Sturridge scored within a minute of his introduction as a second-half substitution in an International Champions Cup defeat of Premier League rivals Manchester United.

And Liverpool manager Jurgen Klopp is keen to keep Sturridge for the 2018-19 campaign, with Liverpool hoping to push for honours after signing Alisson, Naby Keita, Fabinho and Xherdan Shaqiri.

"We have a fantastic relationship. I like him a lot as a person and as a player especially," Klopp said after Liverpool's 4-1 win against United in Michigan.

"There is no doubt about his quality. If Daniel is fit, he will play a role in the team, 100 per cent."

Liverpool's pre-season continues with a friendly against Serie A side Napoli on Saturday, with Klopp's side getting their 2018-19 Premier League underway against West Ham on August 12.