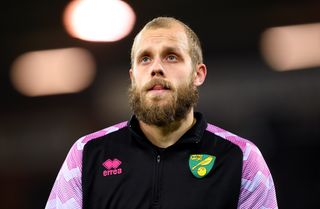 Teemu Pukki plans to shoot down Wales after rebuilding his confidence following Norwich’s relegation from the Premier League.

The Finland striker made a sensational start to life in the top flight last season, scoring six goals in five games as the newly-promoted Canaries began the campaign in promising fashion.

But Pukki’s problems in front of goal mirrored Norwich’s slide down the table, with the 30-year-old netting only twice after Christmas and not once in his final 15 appearances of the season.

Norwich were relegated with only 21 points – 13 adrift of second-bottom Watford – and lost all 10 matches played after the coronavirus lockdown.

“There was a test of self-confidence,” said Pukki, speaking ahead of Finland’s Nations League opener against Wales in Helsinki on Thursday.

“For myself and the whole team in England, we did not succeed in the games. That’s why we dropped out of (Premier League).

“Personally, when there are no goals, it’s not an easy time for the attacker. My main job is to help the team with goals.

“It was a really long season. Although there was a break due to coronavirus when we didn’t play, we still trained hard alone.

“It was physically and mentally tough and the rest of the season went the way it went.”

Pukki was back among the goals on Norwich’s pre-season tour of Germany last month.

He scored in wins over Dynamo Dresden and SV Darmstadt to boost his confidence ahead of international duty.

“Of course, a couple of goals in training games boosted my mood and self-confidence,” said Pukki, who spearheaded Finland’s march to the delayed 2020 European Championship with 10 goals.

“They were just training games, but it was important to get goals after a long time.

“I tried to forget about the rest of the season and start over now. Now it feels better again.

“The break was good, even if it was short, that I got my thoughts out of football.

“Now I have full focus on the national team and these games. When I get back there, then the focus starts on the club.”