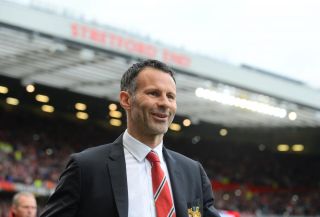 Taking the reins at the end of a turbulent week, in which David Moyes was sacked, the reigning champions eased to a 4-0 win over their relegation-threatened opponents at Old Trafford on Saturday.

Wayne Rooney opened the scoring with a 41st-minute penalty and added a second three minutes after the break, before Juan Mata emerged from the substitutes' bench to notch a brace.

Giggs' team, displaying six changes from the XI that brought down the curtain on Moyes' tenure in last weekend's abject defeat at Everton, endured struggles often seen during a lacklustre season before Rooney broke the deadlock.

And they emerged revitalised following some well-placed words from the man in charge at half-time.

"I picked a team that I thought could win the game," Giggs said.

"To be honest with you, first half, the tempo probably wasn't as quick as I'd like it to be.

"Maybe that was down to it being a big week, an emotional week, and the lads have trained hard.

"It took a bit of time for us to get going but the goal came for us at the perfect time and, going in at 1-0, I just said 'quicken up the tempo and we'll be okay'."

United's longest-serving player enjoyed a rapturous reception when he walked one onto the turf in his club suit, but admitted to struggling with some of the less-favourable aspects of a manager's job.

"The reception was great," he said. "I've walked out of that tunnel so many times in big games and that's the best feeling I've had.

"I felt 10-foot tall, so proud, and the fan's reaction was great - just like it has been all week.

"Did I sleep last night? No, in a word. Leaving out players was the reason I didn't sleep.

"It wasn't nice. They're team-mates of mine. I've never had to do it before and I'll continue not enjoying it. That has been the hardest part of this week."

How long Giggs will stay in the role is a matter for debate.

Nevertheless, Giggs is focused purely on the final three games of the season - starting with a game against Sunderland, another struggling side, next Saturday.

"Honestly, I’m just looking forward to Sunderland now and that's it," he added.

"That’s what my focus and concentration is on. I'm not looking any further ahead than that."