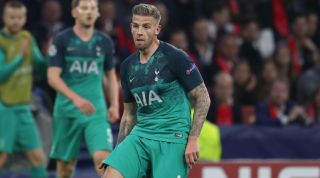 Alderweireld has long been linked with a move to Manchester United, but the Belgian intends to honour the final year of his contract according to the Evening Standard.

"I'm going to say the same thing that I've been saying for the past couple of years,” Alderweireld said when asked about his future.

“The only focus is Spurs, and because of this focus I think I had a good season as well. I have one year left on my contract, so in my head I will play for Spurs next season."

However, Alderweireld does have a release clause of £25 million that becomes active in the final two weeks of the transfer window.

For now, though, the Belgian is focussing on the Champions League final against Liverpool.

“We are going to do everything to win it and if we win it I think we deserve it as well."